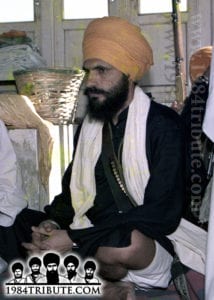 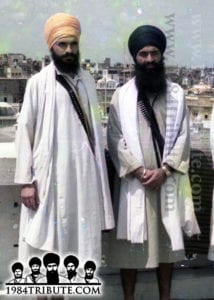 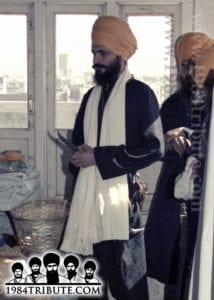 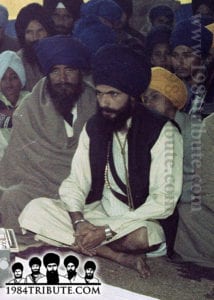 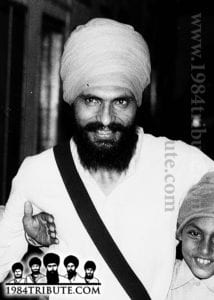 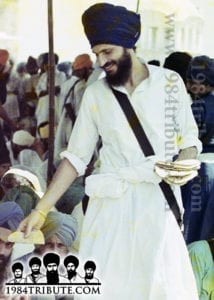 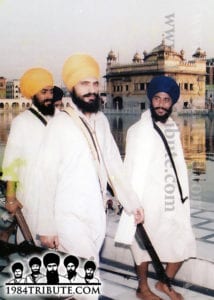 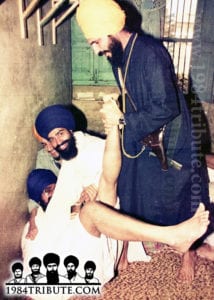 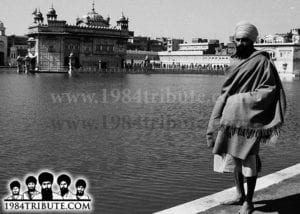 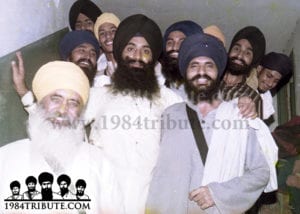 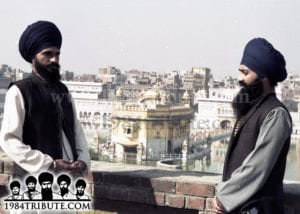 After many centuries the sikhs were given the chance to defend Sri Harimandir Sahib and attain martyrdom on their holiest ground. In June 1984, when the Indian army stormed Sri Harimandir Sahib with tanks and cannons, many Sikhs defended the complex and attained shaheedi fighting the enemy, amongst these blessed souls was Shaheed Bhai Dalbir Singh Abhyassi.

At the time of the partition, the family of Bhai Sahib who lived in the village of Barki, district Lahore moved to Sri Mukhatsar’s village Dhigana. It was here Bhai Sahib took birth in the house of Sardar Didar Singh and from the womb of Mata Davinder Kaur. Bhai Sahib studied up till 5thclass at the local village school and studied up till 10thclass at a school in the nearby village of Rupana. After that Bhai Sahib started farming and took on the responsibilities of the household. Bhai Sahib loved to hunt, he had an antique rifle with which he would go hunting regularly. As Bhai Sahib continued to hunt, his aiming also continued to improve.

Soon something was to happen that would wake the Sikhs up around the world. Waheguru made many Sikhs the part of this glorious history to be, Bhai Sahib’s name had also been picked and slowly Waheguru was preparing Bhai Sahib for his ultimate goal. Bhai Sahib started waking up at 4 o’clock in the morning and after having a bath he would go to the Gurudwara to listen to Gurbani and would return home after the Ardas. It was during these days Sant Kartar Singh Ji Bhindranwale came to Sri Mukhatsar Sahib. Bhai Sahib went to meet Sant Ji but Sant Ji had left for Ganga Nagar. Bhai Sahib desperate to meet Sant Ji, then travelled to Ganga Nagar in Rajasthan. Upon meeting Sant Kartar Singh Ji Bhindranwale, Bhai Sahib made a humble request, “I have left my house, I want to do sewa alongside your Jatha.” Sant Ji fulfilled this request of Bhai Sahib and allowed him to join their Jatha. After joining the Jatha Bhai Sahib wrote a letter to his childhood friend, Bhai Baljinder Singh in which he wrote, “I have joined the Jatha of Sant Kartar Singh Ji Bhindranwale, please tell my family not to come to take me home. I will not be returning now. I have taken Amrit from the Panj Pyare, I tie a round turban, I wear a long Chola and I tie a Kamarkasa around my waist.”

After joining the Jatha Bhai Sahib requested Sant Kartar Singh JI Bhindranwale to do Katha at his village in Dhigana. After this Sant Ji came to Dhigana twice to do Katha. During the time in Dam Dami Taksal, Bhai Sahib was able to do Gurbani meditation for over 18 hours non-stop. It was for this reason the singhs of the Jatha nicknamed Bhai Sahib, Abhyassi (Meditator). The colour of Dharam was taking over Bhai Sahib, that in a short while Bhai Sahib became an excellent Kathavachik too. Now whenever Bhai Sahib came to his village he would always do Katha.

In 1980, some days after the assassination of Gurbachana Narakhdhari Bhai Sahib returned to his village for the last time. Here Bhai Sahib told his close friend, “We done something big, if the police come then don’t tell then don’t be scared. Just tell them that I have been living with the Jatha for a very long time and you don’t know anything about me.” After that the police came to Dhigana relating to the assassination of Gurbachana Narakhdhari, but the only information the police got was that Bhai Sahib lives with the Jatha of Sant Jarnail Singh Ji Bhindranwale. The police never returned to Dhigana after that nor did Bhai Sahib return to his house.

On the evening of 12thMay 1984, Sant Jarnail Singh Ji Bhindranwale was sitting on the upper level of Sri Akaal Takht Sahib. Some of the singhs from the Jatha were present with the sangat also. At that time Sant Ji’s mind was elsewhere, as if he was waiting on some news. Singhs were being sent by Sant Ji to listen to the news on the radio after 10-15 minutes. Bhai Sahib was also in his room with his radio on and waiting to hear the news. In the end the wait was over. They heard the news on Akashvani Radio and their faces lit up with happiness, war cries of Bole So Nihal Sat Sri Akaal were shouted out. Bhai Sahib also heard the news in his room and ran up the stairs of Sri Akaal Takht Sahib to tell Sant Ji. Upon seeing Bhai Sahib, Sant Ji said, “Here you go Dalbir Singh, you sent the father to hell. Now others have sent the son to hell.” Bhai Sahib replied, “I ran all that way to tell you the news, but you have told me the news.” The news of the assassination of Ramesh Chandar (son of Lala Jagat Narayan) made the whole Jatha happy.

When close friends of Bhai Sahib came to Nanak Niwas to meet him, they met Sant Ji and this was the time when the locals of Dhigana got to know Sant Ji personally. Sant Ji told the sangat of Dhigana, “When he (Bhai Sahib) is happy, he always talks about his village. You should be proud of him he has put Dhigana on the world map. You should also do sewa of the panth.” once Bhai Baljinder Singh, the childhood friend of Bhai Sahib came to Nanak Niwas and was waiting the singhs from the Jatha of Bhai Sahib. As they talked one of the singhs said, “He (Bhai Sahib) is a very high spirited Singh. He snatches guns and ammunition from the CRPF soldiers.

Soon the time came which Waheguru had prepared Bhai Sahib and thousands other singhs and singhnia. The Indian government attacked Sri Harimandir Sahib and the foundation of Khalistan was laid with the blood of Jhujaru Singhs and Singhnia. Before the sunrise of 6thJune 1984, the Indian tanks and cannons attacked Sri Akaal Takht Sahib, in an attempt to demolish Sikhi. Bhai Sahib was positioned at the ground floor of Sri Akaal Takht Sahib. Bhai Sahib and fellow singhs caused major damage to the enemy with their machine guns from their bunker. It was here Bhai Sahib faught the Indian army till 6thJune and attained shaheedi on the holy ground of Sri Harimandir Sahib. 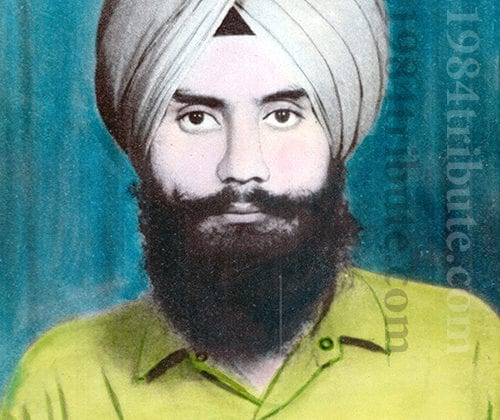 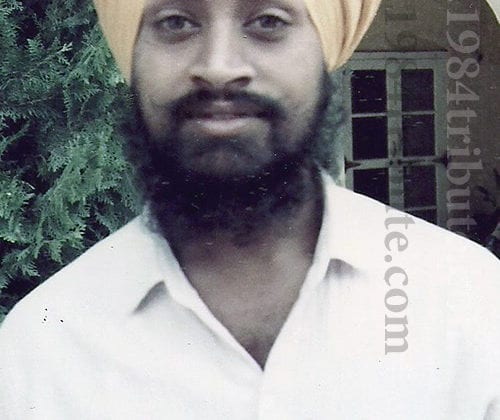