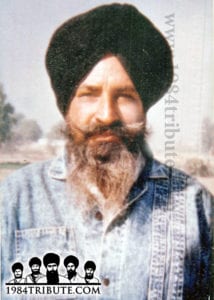 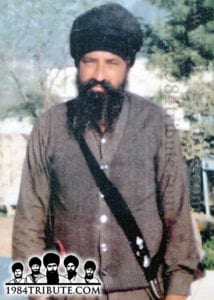 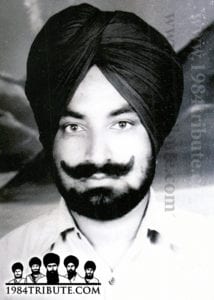 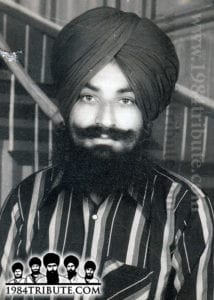 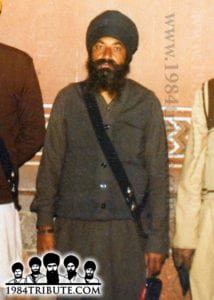 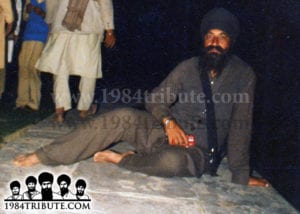 Born in the house of Sekhon sardars, Shaheed Bhai Baljinder Singh Sekhon Babbar was a fearless warrior of the Sikh panth. As well as being fearless, Bhai Sahib was humble and always spoke the truth. Bhai Sahib learnt his Sikh gurmat from Sant Kartar Singh Ji Bhindranwale. Bhai Sahib always supported the elders and the poor people. Bhai Sahib stood against the Narakhdhari cult and said, “These people are not nice, they will cause damage to the Khalsa panth. Their thinking has gone completely wrong.”

Bhai Baljinder Singh Sekhon Babbar was born in the house of Sardar Jarnail Singh Sekhon and from the womb of Mata Gurtej Kaur in the village of Chibrianwali, district Mukhatsar. Bhai Sahib studied up till 10th class at a local school of Chibrianwali. Bhai Sahib was a kind hearted person. When the Sikh Freedom Movement was in chardikala, Bhai Sahib secretly made contacts with the local Khadku Singhs. Bhai Sahib came into the eyes of the Punjab police via the Dharam Yudh Morcha. Bhai Sahib faced every difficulty with a smile on his face, but Bhai Sahib never took eyes of the overall target which was freedom. If any Khadku actions happened in the area, the police would arrest Bhai Sahib and later torture him at the police station. Inspector Harbhagwan Sodhi, ASI Sham Sundar, ASI Bachan Singh Butcher and many other evil police officers had tortured Bhai Sahib and amongst themselves they would say, “Baljinder’s will power is strong as well as his body. He gives no information, no matter how much we torture him.”

When the state elections were announced in Punjab, the Khadku Singhs announced a boycott to the elections. A candidate by the name of Bodhi was fighting for the MLA seat from Mukhatsar. Babbar Khalsa had killed Bodhi, the singhs who carried out this action had used a scoter. Soon as the police caught up with the singhs, the Babbars left the scooter behind and managed to escape on foot. The investigations in to the scooter led the police to Bhai Sahib. Inspector Harbhagwan Sodhi arrested Bhai Sahib from his house. First the police continuously tortured Bhai Sahib blindly at the CIA HQ of Mukhatsar. Then Bhai Sahib was given to the police of Sadak, from here Bhai Sahib was locked up in Faridkot jail on numerous fake cases. From the jail Bhai Sahib was taken to CIA HQ again but this time in Faridkot, which is near the local bus station. Bhai Sahib was inhumanly tortured by the Indian security forces. The police kept on asking Bhai Sahib for the locations of the Babbar Khalsa hideouts in the Mukhatsar. The police had tortured Bhai Sahib so much that his spine had separated from his pelvis and Bhai Sahib could not move at all. Bhai Sahib’s body from hip down was being dangerously infected. The police did not take Bhai Sahib to the bathroom to urinate or to have a shower. The police had left Bhai Sahib in the cell to die. Fellow inmates asked Bhai Sahib if he wanted water, but Bhai Sahib replied, “No brother, I do not need water but can you put my kanga back into my hair please.” The following morning Bhai Sahib was nowhere to be seen.

When the family tried to find out where Bhai Sahib was and what had happened to him, the police straight away said, “We don’t know, Baljinder is not in our custody.” The police booked a case of lost person for Bhai Sahib. But the truth was the police had killed Bhai Sahib and secretly cremated Bhai Sahib so no one could point a finger at the police of Punjab. After a great amount of queries and searching the family of Bhai Sahib gave the hope of Bhai Sahib being alive and held his final Ardas at the Sri Akhand Paath Sahib in the home village of Chibrianwali on 27th December 1992. The Sikh panth salute a fearless, humble and a true warrior of the Babbar Khalsa. Shaheed Bhai Baljinder Singh Sekhon Babbar had said no to water in his dying moments and asked for his Kanga (wooden comb, one of the five Kakkars) to be put back in his hair. This is the love a Gursikh must have for Sikhi and only then can we become azaad (free) Khalsa.