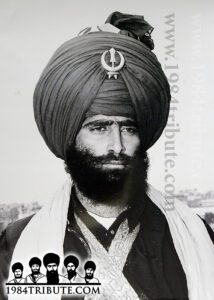 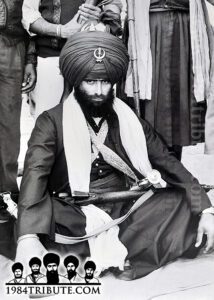 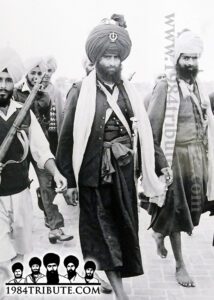 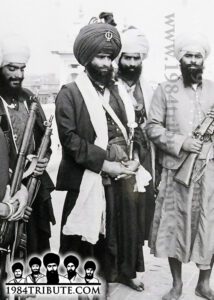 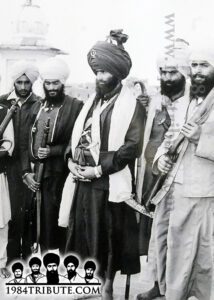 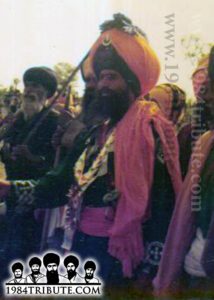 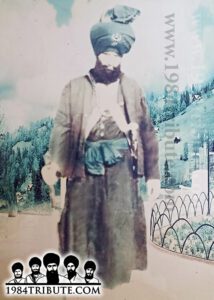 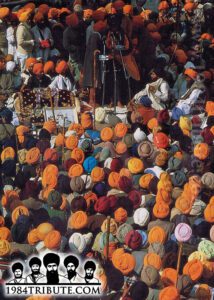 The Jathedar of the Nihang Singhs of Budha Dal, Bhai Amrik Singh Jaura was born in the year of 1958, in the house of Jathedar Mukhtiar Singh and from the womb of Mata Pal Kaur in village Jaura, near Patti, district Tarn Taran. Bhai Sahib’s father provided for his family via farming. Bhai Sahib was the only brother to his 4 sisters, eldest Bibi Amarjit Kaur, Bibi Veer Kaur, Bibi Nirvair Kaur and Bibi Paramjit Kaur.

In June 1984, the Indian army attacked Sri Darbar Sahib Amritsar and surrounding 40 Sikh temples in an attempt to crush the Sikh spirit. Countless Sikh pilgrims were massacred in this attack by the Indian army, this whole ordeal had a deep impact on Bhai Sahib. Prior to the attack, Bhai Sahib was very close to the 14th Jathedar of Damdami Taksal, Sant Jarnail Singh Ji Khalsa Bhindranwale. Bhai Sahib had also given voluntary arrest multiple times during the Dharam Yudh Morcha. Following some speeches of Sant Ji, Bhai Sahib did Jhujaru actions in secret.

After the attack on Sri Darbar Sahib Amritsar, seeing the desecration of Sri Akaal Takht Sahib, the heart of the Sikh nation was deeply hurt and this started an armed struggle for Khalistan against the Indian state, which scared India to its core. Indira Gandhi and General Kuldip Brar spoke to many Sikh leaders to start the rebuilding of Sri Akaal Takht Sahib with the money of the Indian state, but no leader agreed to this. It is known that Baba Kharak Singh of Kar Sewa even slapped General Kuldip Brar when he was approached to spearhead this rebuilding project. Then the home minister, Buta Singh was bought forward by the Indian government. Buta Singh then involved Baba Santa Singh of Budha Dal who already had close ties to Indira Gandhi to start the rebuilding of Sri Akaal Takht Sahib under the watchful eye of Indian government. This was not accepted by the Sikh nation. Baba Santa Singh, under the protection of BSF and CRPF hired laborers from Bihar and started the building work, which was heavily opposed by the Sikh nation.

Then on 26th January 1986, Damdami Taksal and Sikh Student Federation with blessings of the Sikh nation held a Sarbat Khalsa at Sri Akaal Takht Sahib. At this Sarbat Khalsa, the Sikh nation decided to expel Budha Dal Jathedar, Baba Santa Singh from the Sikh Panth. In his place, Bhai Amrik Singh Jaura was announced the new Jathedar of Budha Dal. Sant Baba Thakur Singh Ji Bhindranwale, Baba Gurbachan Singh Manochahal and Bhai Gurnam Singh Bundala had great amount of respect and love for Bhai Sahib as he did for them.

At one Smagam, Baba Kahan Singh who was a leader of Nihang Dal and also visited Sant Jarnail Singh Ji Khalsa Bhindranwale many times during the Dharam Yudh Morcha. He was also known a close associate of Indira Gandhi and had Jhujaru Singhs arrested. This is the same Baba Kahan Singh who was known as Kahana Nang. After the attack, Kahana Nang had spoken out against Sant Jarnail Singh Ji Khalsa Bhindranwale in Khadur Sahib. One Jhujaru Singh who confronted Kahana Ning about this on the spot was Bhai Sukhdev Singh Sakheera. Kahana Nang ordered his goons to beat Bhai Sakheera and knocked Bhai Sakheera’s turban off his head. Bhai Sakheera told Kahana, “Until I don’t kill you, I will not tie a turban.” The day came, Kahana Nang was spotted with his group of goons at Sri Hazur Sahib, Nanded. Bhai Amrik Singh Jaura, Bhai Sukhdev Singh Sakheera and another 2 Jhujaru Singhs disguised themselves as Singhs from Kar Sewa and borrowed the jeep of Baba Utam Singh to go Nanded where they assassinated Kahana Nang. Some people say that Bhai Amrik Singh Jaura was not in Nanded himself during this action, and had sent Jhujaru Singhs to carry out this action. After the assassination of Kahana Nang, Ajit Phoola Nang took over his goons, who was a known ruthless killer. He had many Jhujaru Singhs martyred, eventually Jhujaru Singhs killed him also.

Bhai Sahib had preached Sikhi all over Punjab and had great relationship with Jhujaru groups, especially Khalistan Commando Force. Bhai Sahib was active in the struggle for freedom, and accommodated many Jhujaru Singhs. Bhai Amrik Singh Jaura was overseeing a construction of a Gurdwara, when he was martyred by 2 men. It is said that Bhai Sahib was martyred by black cats of the Punjab police.

Information given by the family of Shaheed Bhai Amrik Singh Jaura 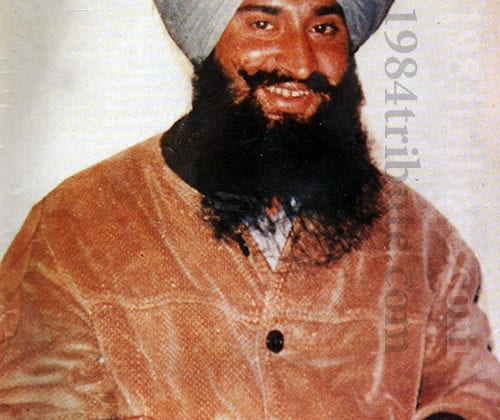 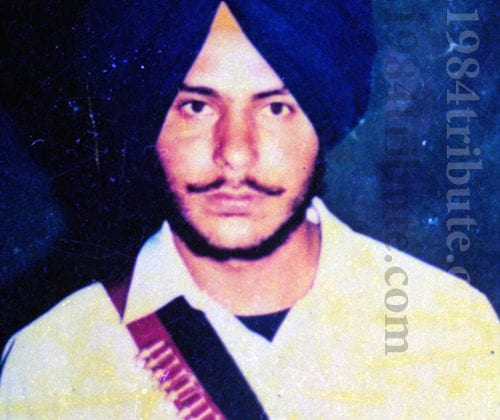